As you can imagine, walking the PCT is a difficult endeavor.  Washington, at least for me, represented the trail at its most violent, exhausting, breath-taking, and life-sapping.  Part of me felt like I was bleeding into the earth (in a good way), and part of me felt like I was being crushed down into an atomic stew that was sloshing its way across rock and forest and river.  The daylight seemed to slip by in large chunks, so that I could almost hear time crashing over itself and falling away.  Evening came on soon and swift and I was left scurrying for some flat spot to pitch a tent.  The rains came, and then the rains left, and all that remained was deep blue sky and a dirt path that ended in British Columbia.  Rather than saying, “That’s a long way!” or, “What?!” when I told people I was walking to Canada, people began saying things like: “You’re right around the corner,” and then, “It’s almost over,” and finally, “Congratulations, you did it.”  I spent the last couple days in a victory lap, albeit before the victory was won.  People were very nice to me, and I felt their sincerity.

After deciding to stop writing in the evenings I was much happier.  I enjoyed the blogging process until it felt like a burden; the whole thing came to a very natural end for me.  I would sit (hopefully on some fallen tree) and eat my little dinner and think about things until the cold settled in so deeply that I had to get into my sleeping bag.  Then, I would unwrap all my candy bars for the evening, or a jar of Nutella, or cookies, or whatever sweet things I allotted myself for the night and gobble them down while listening to Harry Potter on my mp3 player.  Life was good.

I wrote this whole thing first and foremost for me, so that I might remember.  But those last few hundred miles will remain undocumented.  Even now they have slipped into mystery and nostalgia.  But I have enough to keep me going.  I imagine the annals of Washington will stay with me for some time, imprinted on neurons, and then fade along with the rest of my memories.  Maybe they will stay for the rest of my life.  Which would be fine with me.

As it is, the 2660 are complete.  I maintained a continuous footpath from one border of our country to the other.  I’ve come out on the other side of a thru-hike and made my way in the world again.  Sometimes I think about the trail and it hurts me, because I miss it so desperately.  I own everything, which is a special and sorrowful thing.

I ended up in Canada, reaching my goal.  The trees were turning and the rains had set in.  I thought the end would be overwhelming, but it wasn’t.  I thought I would cry, but I didn’t.  In reality, I just set my pack on the ground and laid my hands on the northern monument.  Mosquitoes were biting me.  I stood there for 15 minutes and tried to think of everything but my mind was blank.  Eventually I just picked up my stuff and walked on–as I had been doing for months.

After you reach the Canadian border, you have to continue on another 7 miles to get to a road.  This is the true end of the trail.  I walked up to the pavement and looked across.  For thousands of miles the footpath was there on the other side, but not this time.  I loaded my things in a car, and that was it.

I’ve avoided any John Muir quotes along the way, but there’s one piece of his writing I always return to.  I like it because it reads like a benediction, which is what I believe it to be.  As I envision it, he’s pronouncing these words with his hands held up, bestowing a kind of wisdom and a blessing:

“Walk away quietly in any direction and taste the freedom of the mountaineer. Camp out among the grasses and gentians of glacial meadows, in craggy garden nooks full of nature’s darlings. Climb the mountains and get their good tidings, Nature’s peace will flow into you as sunshine flows into trees. The winds will blow their own freshness into you and the storms their energy, while cares will drop off like autumn leaves.” 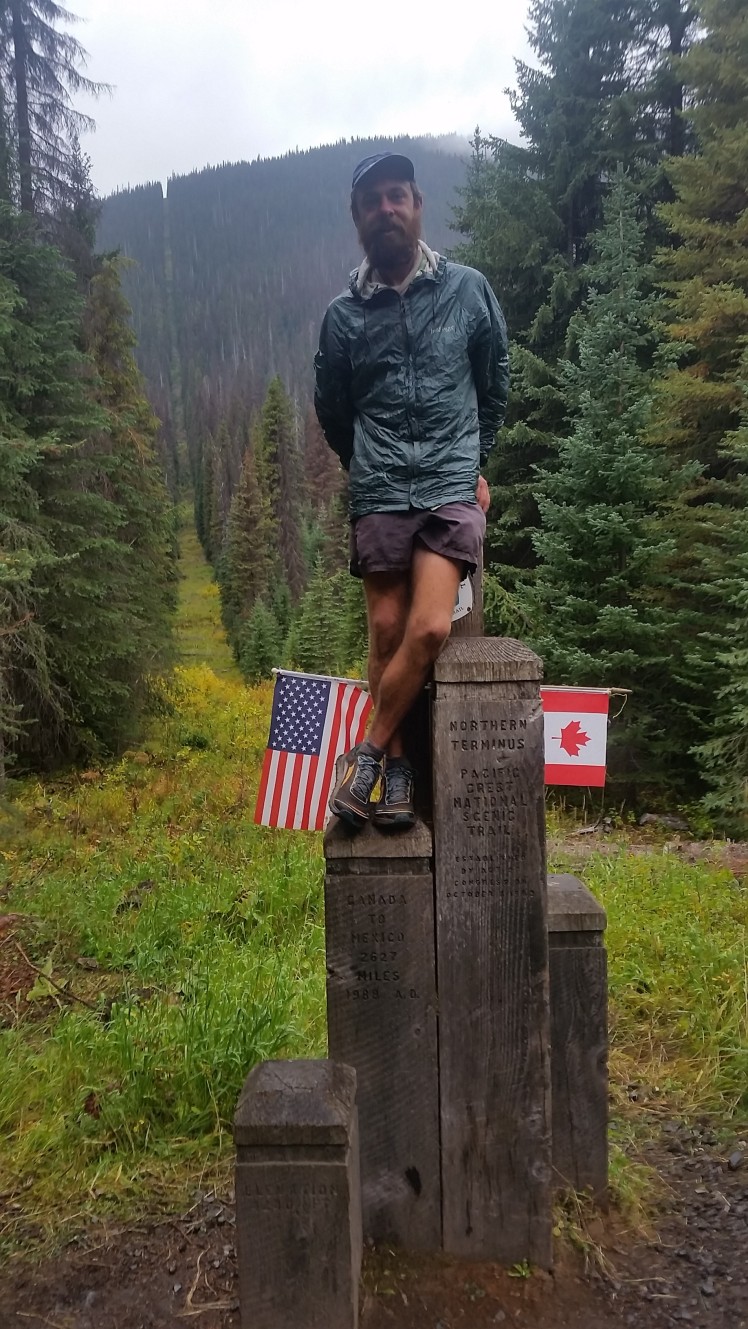