We hike through the heart of the Salt Creek Alternate in what was surely the best day of the Hayduke so far. The mornings seem to be getting colder and colder, but we’ve also been gaining elevation as we move away from Arches. The geography in south Salt Creek has a true valley feel, and it reminded me of a smaller desert version of Yosemite in that there was a flat broad meadow-like landscape surrounded by vertical or otherwise imposing walls. 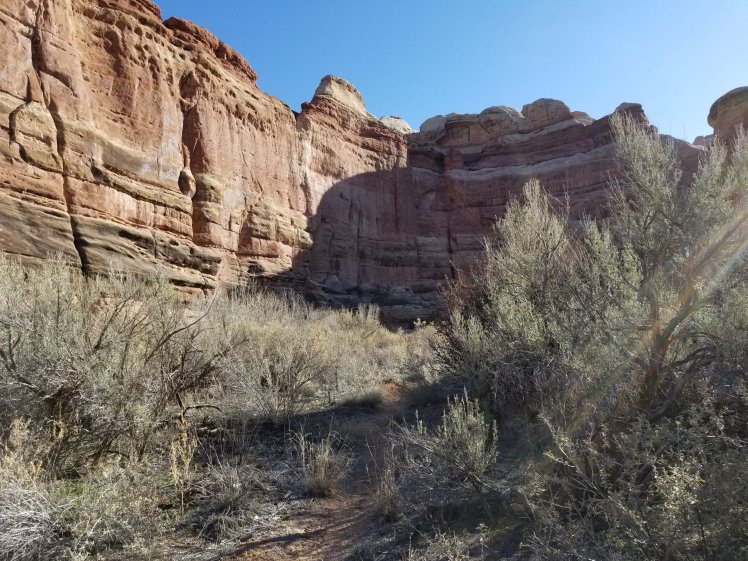 At one point the trail goes through a small keyhole and one can bend over a peer through rock into the valley beyond. Had a dinosaur come ambling into view in the distant field it would have seemed perfectly natural. 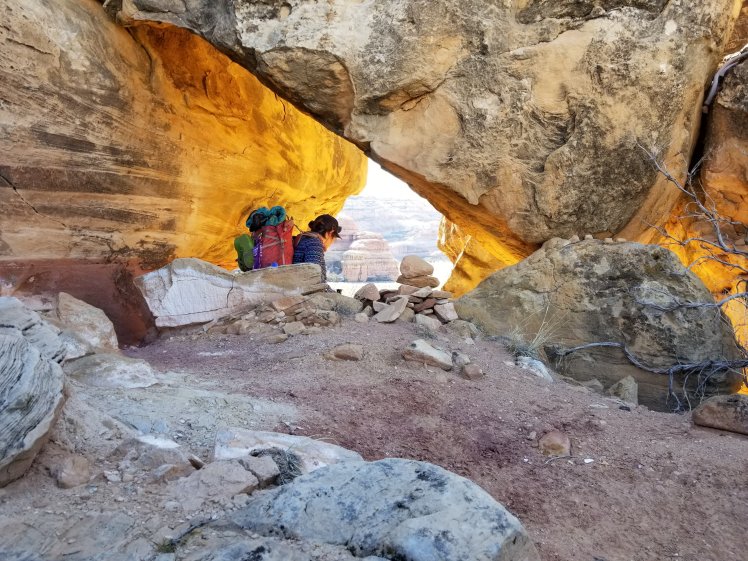 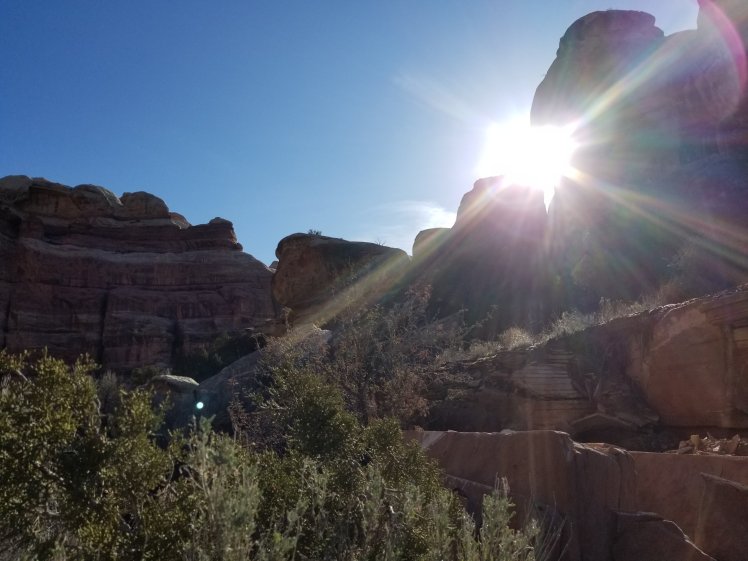 Of course the true reason I opted for this alternate are the pair of famous petroglyphs. What a remarkable thing to see these ancient cliff drawings, and I encourage anyone who is able to make the visit out to Canyonlands and tackle this 20 mile long trail. Madeline and I had to climb a short way up into a cave to reach the second drawing, and once inside I walked into the back of the dwelling, back to where the low ceiling was charred black. This must have been their hearth. I imagine the warmth pouring forth from the spot and warming the entire cave, and maybe a small meal as well. For a moment I was overcome with that brand of emotion that comes with feeling my life directly intersect with the life of another far-away person. It’s the story of humanity, and the things we fill our days with. I imagine the moment I die I’ll too be an ancient far-away person. Mary Oliver says that in the grave she’ll become a little girl again. Maybe the afterlife is just a string of children.

But one cannot remain in Salt Creek forever and soon we left the valley and climb up a side canyon into Dark Canyon Wilderness and the Manti-La Sal National Forest. As we neared the end of the canyon it became clear there would have to be a difficult ascent, and we spent the next hour trying to get over. We were forced to tie rope to our packs, climb up to the nearest ledge, and then hoist the loads up behind us. I ferried mine across without a hitch, but as we were transporting Madeline’s up the sandstone my handhold gave way. There was a split second where I realized I was going to fall, and going to fall roughly 15 feet. I grabbed out for the wall and grasped a rock, only to feel it crumble in my hand and backwards I went, tumbling against the cliff. My rear struck a rock and slowed my descent while altering my trajectory. I lost sense of how my body was oriented in space, but suddenly felt my feet strike earth and dig in. My shoes skidded briefly and then I realized it was over. I had fallen. I called out that I was OK, and stood. Luck. Madeline said it had scared her. She must have seen me go. I learned something about scouting a route today–I’m not eager to repeat that mistake.

The remainder of the day was was simple, just a long continual climb up to over 7000 feet and there was plenty of time to lose myself in thought. Rhymically, my feet struck the earth and avoided the tiny grass-sized cacti. Sand and rock crunched beneath me and I grew sad. What a waste to have to die, I said softly. Is that a fair attitude? I dont know. What a marvel to be given a mechanism such as this, one that can fall and live and get back up and ascend into the sunset pastures. I hope this is not all overly sentimental, but that too is surely a part of living.

At camp an entire broad mountain range comes into view in the distance, and the hills we sleep on are studded with snow and ice. I eat an extra portion of candy before bed, hoping to stay warm.