I wake early, 5:45, in a stuffy hotel room.  I’m in the central California valley, Steinbeck’s country, and I blink in the early morning light.  The place smells like smoke, but it was my only lodging option and was had for a steep price.  Tourist season is in full swing, and the folks of Merced (rightly so) extract what they can of the passers-by before many of them head off to Yosemite or Tahoe.   I get on my phone and call up a taxi service to take me to the local train station, where a YARTS bus (Yosemite’s shuttle service) will pick me and and take me into the park.  The woman who takes me there looks like an addict, and I wonder if she even slept last night.  At the depot, shes drops me off and I thank her and she speeds away.  A group of Chinese tourists arrive, then a few young women, and two pairs of retirees.  The YARTS bus arrives and we get on and the driver takes off.

Orchards and fields pass by mile after mile.  Irrigation channels line the road in places, and in others, barbed wire.  Occasionally a small group of houses springs up and along with them, garbage.  People seem to keep many of their possessions in piles throughout their property.  The scenery floats by, gradually shifting up, and I’m introduced to the granite landscape by degrees.  The flatlands of the central valley turn into rolling hills, each one playing host to a proliferation of small pointed rocks which look like tombstones.  Here and there, as far as the eye can see, are little clusters of tombstone-rock.

I arrive in the park uneventfully and the bus lets off.  Its almost underwhelming to step out and walk to the visitor center.  I’m struck by the human-ness of it all.  There are no angelic halos, no soft lighting, the air doesn’t have the crisp clean mountain smell (I was in a valley after all).  I putter back and forth.

Eventually I get to work on things that need to be done: securing my permit, purchasing last minute items, finding the backpacker’s campground, setting up my tent site, and eating lunch.  Wandering around the valley I come across this site: 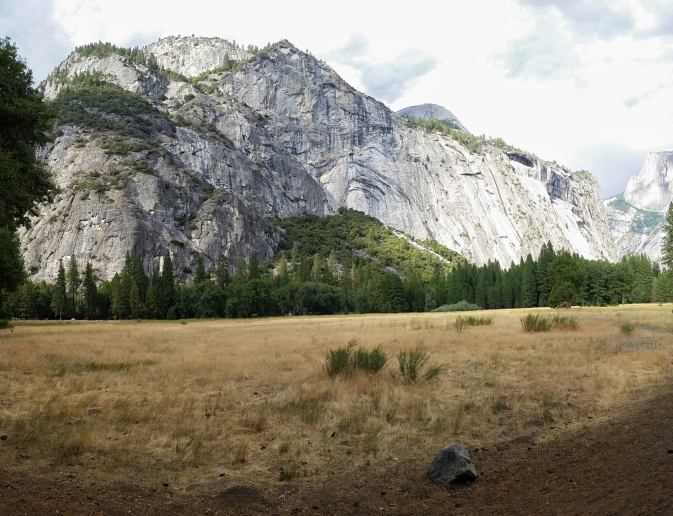 3 hours and a lot of backtracking later, I’m heading out to hike the prologue to my JMT hike: the Mist Trail.  For the first 4 miles, the JMT and the Mist Trail are the same (more or less, as the JMT diverts a couple miles past the trailhead and rejoins a bit later, at Nevada Falls).  Since I won’t be starting at this, the traditional JMT trailhead, I want to day-hike it so I won’t be skipping a 4 mile chunk of trail that’s supposedly very scenic.

The route is strenuous and I hope its not an indicator of how steep I will be climbing in the days to come.  Water comes crashing down from the falls above and makes its way into eddys and pools among the giant boulders.  I pass a family of 4 with two young children.  The kids are lagging behind, playing with the ground and ground-objects, when the mother says, “Don’t touch anything!” I continue walking and after a beat hear the son say, “But you’re touching the ground!” Silence.  I walk on.

Soon I’m at the base of Vernal Falls, the first of two falls on the Mist Trail:

To get the the top I walk along a trail of metal stairs constructed into the side of the cliff, which is only really wide enough for one person.  The resulting two-step and maneuvering gets tricky, but I reach the top and carefully step down the smooth, polished granite towards the point where the water falls over the edge.  A guardrail is in place and I stand a few feet away from the precipice.  Its loud and violent.  I step away after a few moments and walk on.  Thirty minutes later and Nevada Falls is in sight, so I decide to turn around.  The trail I will be hiking in a couple days (Panorama Trail) joints the JMT on the top of those falls; I will wait until then to see it closer.

That night I force myself to eat two dinners and then stand in the nearby Merced River as the sun sets.  I take a moment to think about beginnings and how things even get to be beginnings and what beginnings mean and how often in life we get to measure a moment as a beginning.  I surmise that the whole thing is kind of rare, which makes it a little more special.  I get into my tent at dark and listen to the couple next to me, who, I think, are retired lawyers.  They are green as can be and have hired a young guide, and the couple argues benignly as the guide sets up.  They dine on risotto and open a bottle of wine.  I hear the clinking of glasses.

Birds caw, and then cease cawing.

In the distance exhilarated roars rise up frequently, and die down eventually into nothing and the valley sleeps.

I set out tomorrow.

2 thoughts on “An Arrival”